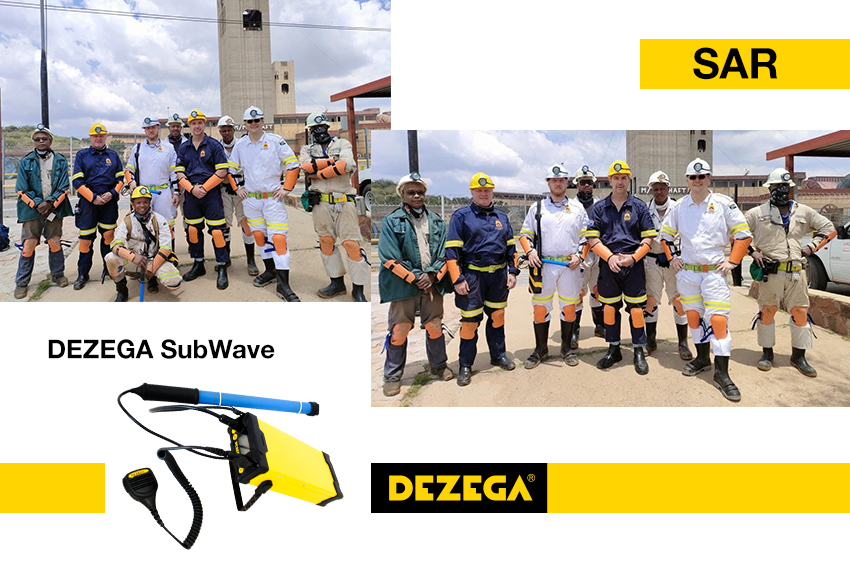 On November the 10th- 11th 2021, the medium frequency underground communication system DEZEGA SubWave successfully passed mine tests. The tests took place at Kusasalethu gold mine, South Africa, accompanied by the top management of the Mines Rescue Services, Carletonville, SAR and members of the Kusasalethu gold mine rescue team.

As on 2020 Kusasalethu gold mine is in the top 10 deepest mines in the world. Harmony Gold, the largest South African gold mining company and the fifth largest gold producer in the world, owns this gold mine, located 90 km west of Johannesburg. The depth of the mine is 3 388m. The tests took place on a horizon of three kilometres. It is noteworthy that the mine has a large amount of infrastructure that creates interference and radio noise (a fairly large and old mine). The mine has a very high temperature and constant water content, which complicates both the mining process itself and the testing of equipment.

Export Director Anatolii Kublii and the Head of Technical Marketing Department Dmytro Vakhnytskyi represented DEZEGA. Colleagues brought a new product for testing in South Africa – DEZEGA SubWave, an intrinsically safe device that provides communication when used underground in mines and pits at distance from 1 to 3 km, depending on the mine communications. Due to the portable underground communication system, the work of rescuers becomes less dangerous, since maintaining communication with the base is possible even in an emergency situation. DEZEGA SubWave allows you to provide immediate information exchange in motion and on the spot, coordinate work and promptly transmit important information without the need to re-equip the mine infrastructure.

The test results are positive: we managed to provide communication at a distance of 3,6 km, which is not the limit for our underground communication system, but, as it turned out, the limit for the horizon (was established from the bore to the place of production). Nevertheless, these results more than three times cover the needs of mine rescuers. All the devices that they previously tested worked either on straight sections or on sections that go sidewise, but not both of these factors together, and the results were significantly different.

An accident happened at this mine more than a month ago. During the management of the consequences of the accident in the mine, two mine rescuers died due to the lack of high-quality communication. They were not able to contact the base on time and transmit important information about the change in the gas and temperature situation, and the group, unfortunately, was not able to request help on time. As requested by the CEO of MRS, the Medium frequency underground communication system DEZEGA SubWave was tested in the same place where the tragedy happened. The test results confirmed that this tragic incident could have been avoided with the help of DEZEGA SubWave.

Nothing stands still, for example, the mining industry. DEZEGA has been working in the RPE market for many decades, developing new products, modifying existing ones and making every effort to create new high quality products in the mine rescue field to help workers in the most extreme situations.

Positive feedback from Mine Rescue Services about DEZEGA SubWave is the highest rating for the company. The opinion of mine rescuers who test the underground communication system and of the users is very important to us. The South African Mine Rescue Service is a kind of mining rescue trendsetter and technical authority for mining enterprises and mines in South Africa and around the world. Soon we will be testing DEZEGA Subwave on other continents but we will talk about this a little bit later.