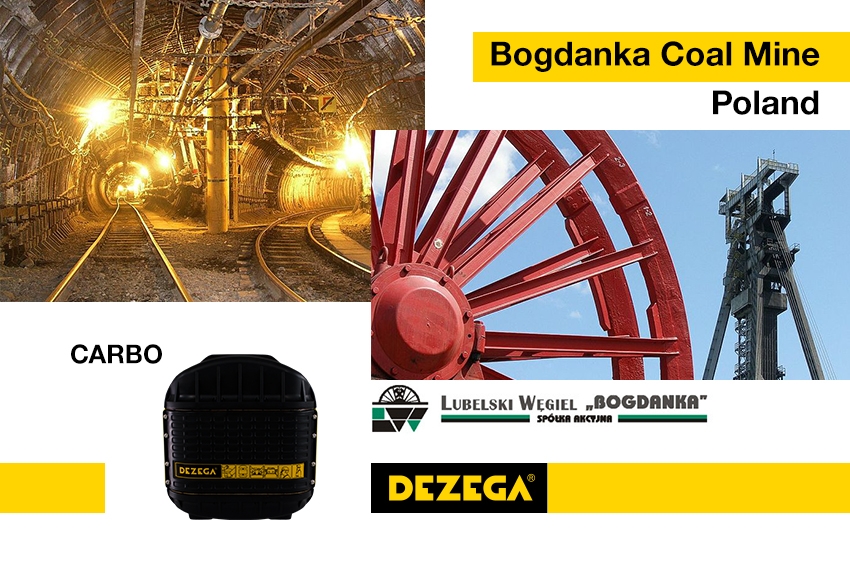 On January 20, 2022, a new ergonomic compact belt-worn self-contained self-rescuer with a long rated duration time DEZEGA CARBO 60 has successfully passed mine tests. Approbation of the equipment took place at the Bogdanka mine, Lublin province, Poland. The construction of the first pilot project at this coalfield began in 1975. Today the mine is known as Lubelski Węgiel Bogdanka S.A.

The tests were held with the participation of both employees of the DEZEGA headquarter and representatives of the Polish office. The equipment was tested under conditions of simulating escape from the mine cut face to a whiff of fresh air. Initially, three miners were preliminary briefed and trained on technical characteristics, operational rules, donning and wearing procedures of the DEZEGA CARBO 60. Further, it was descended underground which was followed by the donning the self-rescuer in the mine face and walking along the route to the whiff of fresh air.

The line of self-contained self-rescuers CARBO is a breakthrough in the RPE industry over the past decades and the users who tested CARBO 60 were impressed by the unit’s design. Successful CARBO 60 tests and positive feedback from miners – the best assessment and appreciation of DEZEGA’s job:

“While developing a new RPE, it is important to take into consideration the fact that the self-rescuer should not interfere with the miner when performing work, and should be comfortable and ergonomic for daily wear, adapted to working conditions. Sure thing, a simple donning procedure plays crucial  role, so that in the case of a real emergency the miner does not have any difficulties with donning the self-rescuer. CARBO 60 is the only self-contained self-rescuer on the market with a fully automatic starter that activates immediately after the apparatus is open. The donning procedure minimizes the risks of a possible fall of the apparatus to the ground and the loss of the initial volume of oxygen”, - noted Yuriy Spivak, Business Development Director at DEZEGA.

DEZEGA is always testing new products with the company’s customers because the feedback from our consumers is very important to us. Later on, we plan to carry out mine tests at all major mining companies in Poland, as well as in other markets around the world.