Mine rescuers won the competition in Vietnam using DEZEGA equipment 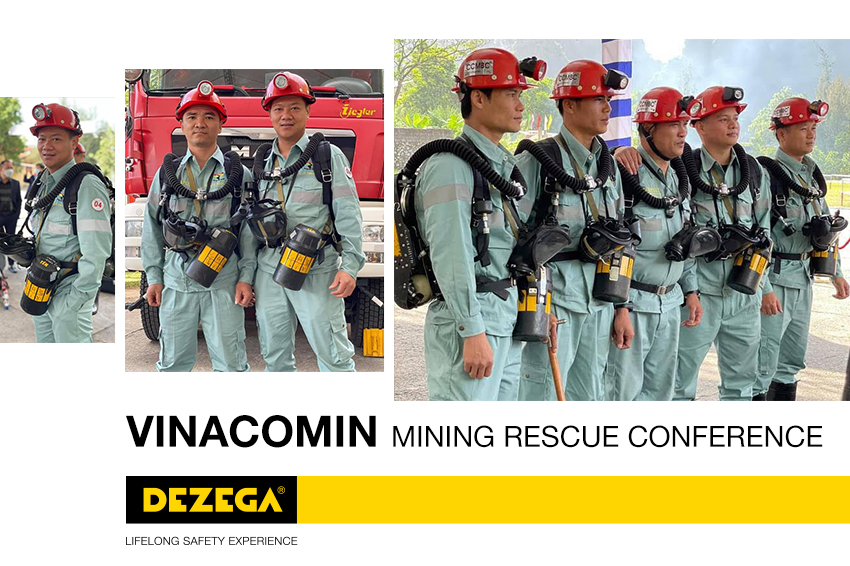 DEZEGA took part in VINACOMIN Mining Rescue Conference, which was held from November the 8th until the 10th, 2021 in Quang Nihn Province, Vietnam. This is one of the key events in the mining industry, that congregates all representatives both private companies and governmental organizations.

Manufacturers and their representatives presented the latest innovations in mine rescue products at the VINACOMIN Mining Rescue Conference, but the highlight of the event was the competition of mine rescuers from all over the country. Our long-term and reliable Vietnamese representative, MINING EQUIPMENT JOINT STOCK COMPANY (MIECO) represented by Mrs Loan Bui, presents DEZEGA company and product line at the exhibition.

We are proud that the victory in the competition and the 1st place went to the mine rescue team which used DEZEGA equipment during the competition. Thanks to the skills of donning, using and maintaining of our legendary compressed oxygen breathing apparatus P-30EX, as well as the 60-minutes shoulder worn self-contained self-rescuer 1PVM KS and mine rescue coils, the mine rescue team won! The most compact and lightweight compressed oxygen breathing apparatus with a rated working duration of up to 4 hours, P-30EX outstands with its simplicity in its intended use and maintenance.

What kind of competition was it, what stages did it consist of and what did the participants have to face?

The organizer of this semi-specialized technical event – elimination of emergencies and their consequences at the mine was Vinacomin (Vietnam National Coal and Mineral Industries Group, Tập đoàn công nghiệp Than và Khoáng sản Việt Nam), the largest mining company in Vietnam, which is specialized in the coal and bauxite mining.

Mine rescue competitions are held on a regular basis – once every two years. In 2021, 13 teams took part in the event. The participants competed in four categories: rescue and elimination of incidents in underground mines; first aid treatment; development of hypothetical situations by the emergency brigade; mine rescue and rescue operations.

During three days of competition, the teams demonstrated all their courage, best skills, competence and endurance, despite the fact that they had to work in narrow tunnels, at high ambient temperature in conditions that simulate a real emergency. Although the concentration of smoke was significant, all team members competed accurately, quickly and in a well-coordinated manner.

The organizing committee awarded the first, second and third places to the winning teams. As the result, the team that used DEZEGA equipment, Mong Duong Coal, Vinacomin, took 1st place. The 2nd place was taken by the Vang Danh Coal - Vinacomin and Mao Khe Coal Company and the 3rd – by the participants from Ha Lam Coal - Vinacomin, Nam Mau Coal Company and Duong Huy Coal Company. Besides, the organizing committee awarded prizes to several more teams with excellent results and achievements in four categories.

We sincerely congratulate the winners of the competition! In addition, DEZEGA will keep on working to ensure the safety of underground workers all over the world, developing new breathing apparatus and implementing innovative technologies.