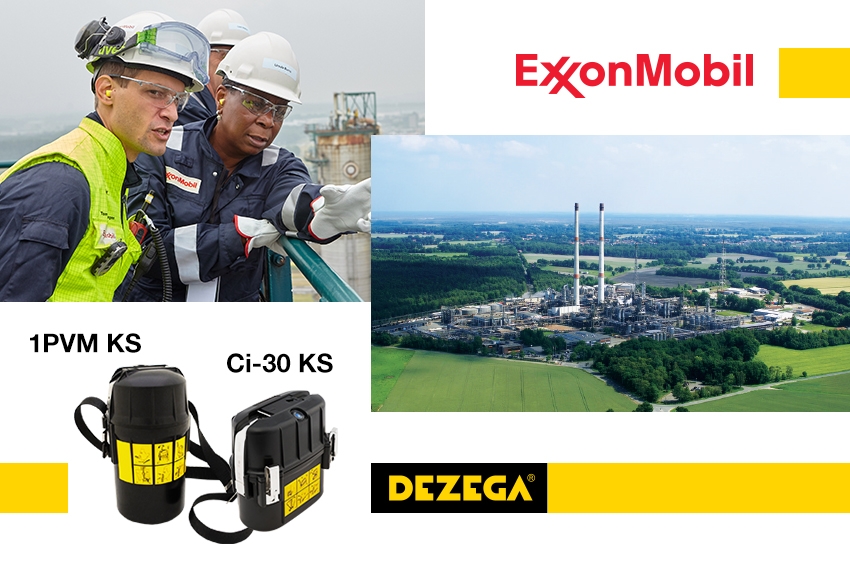 DEZEGA has signed a contract for the supply of mine rescue equipment for the needs of the German division of the globally known American company ExxonMobil. Breathing apparatus, developed by Ukrainian specialists, will ensure the safety of the firefighting crew and employees of the German oil and gas plant ExxonMobil Production Deutschland GmbH in case of an emergency.

DEZEGA, the international designer and manufacturer of mine rescue equipment, has concluded a contract for the supply of respiratory protective equipment (RPE) for ExxonMobil Production Deutschland GmbH, which provides exploration, production, and processing of natural gas and petroleum products. The Company offers fuels, heating oil, lubricants, and plastics and petroleum-based intermediates.

ExxonMobil Germany has purchased several models of DEZEGA self-rescuers for field trials. Our competitor took part in the tender – a German manufacturer, which supplied RPE for the client before. As a result, devices manufactured by DEZEGA successfully passed the competition and two stages of testing.

Within the frames of tender, DEZEGA has already done the first supplies of its compact Ci-30 KS, 1PVM KS SCSRs, which have European certificates. These self-rescuers will provide respiratory protection for the firefighting crew and employees of the German oil and gas plant ExxonMobil Production Deutschland GmbH in case of an emergency. With the help of DEZEGA training self-rescuers (TRAINER and TRAINER C), which already have been supplied to the plant, the workers will be able to practice donning and evacuation procedures in conditions close to reality. Such training helps workers react appropriately and immediately during emergencies, thus ensuring the chance for rescue. In addition, we supplied the auxiliary equipment for training self-rescuers and DEZEGA leak testing device (UPG and PGS-2), because leak tightness is one of the most important conditions for the equipment, using chemically bound oxygen. All training materials were also provided, including videos, brochures and posters.

“The RPE supply for the oil and gas industry brings DEZEGA to a new stage of development. In comparison with the competitors, DEZEGA always responds promptly to customer needs. We can develop and adapt the devices for the specific request of the end user. Customization is one of DEZEGA advantages. One of the tender conditions from ExxonMobil Production Deutschland GmbH was the shoulder carrying of the self-rescuer Ci-30 KS.  Due to the orchestrated efforts of the technical marketing, the R&D center and the sales department teams, we developed, implemented and put into production Ci-30 KS devices with the shoulder carry option, and in August 2020, we made the first deliveries to the client. Shortly, we plan the further deliveries of our equipment and cooperation expansion between our companies. In particular it regards to our 4-hour CC SCBA P-30EX”, – admitted Yuriy Spivak, Business Development Director, DEZEGA.