DEZEGA supplied RPE to Qatar for the FIFA World Cup 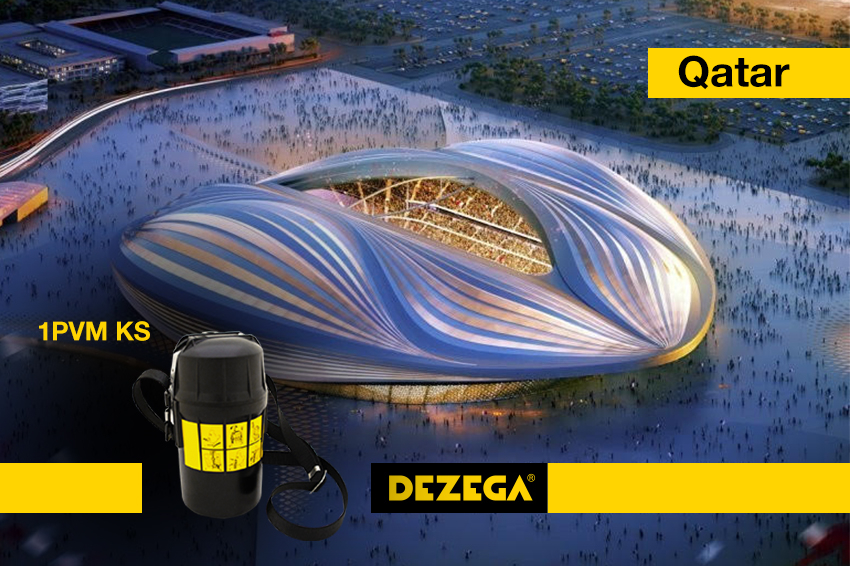 DEZEGA respiratory protection equipment will be used by the underground tunnel builders of the Al-Janoub Stadium and neighboring sophisticated infrastructure in Al-Wakrah, Qatar, for the arrangement and maintenance of underground facilities in confined spaces.

The international developer and manufacturer of respiratory protection equipment (RPE) DEZEGA supplied a batch of self-contained self-rescuers for PORR AG and MIDMAC, contractors (a joint venture of international companies of Austria and Qatar) for the construction of a stadium in the suburbs of Doha – Al-Wakrah. PORR AG – is one of the largest construction companies in Europe that is specialized in civil engineering, including transport routes and tunnels, as well as building construction, environmental engineering and facility management. MIDMAC is a large contractor in Qatar that has been working under the aegis of QIPCO since 2005 on projects in real estate, oil and gas, trade and services, financial services, education, healthcare and specialized joint ventures.

DEZEGA 60-minutes shoulder worn self-contained self-rescuers 1PVM KS, which have a European certificate, will be used to protect respiratory organs of the Al-Janoub Stadium builders when servicing and maintaining neighboring underground infrastructure in confined spaces: tunnels, communications, sewers, etc. In addition, self-contained self-rescuers will be used in the construction of the giant pumping station and a 10 km long water outlet tunnel to discharge surface and storm water, which reaches out to the Persian Gulf. By the way, this underwater tunnel is the seventh longest in the world and the longest in the Middle East. 1PVM KS is reliable, easy to handle and use for its intended purpose that guarantees minimal time to don in an emergency. The procurement started in September 2021.

Al-Janoub is one of the first stadiums in Qatar, built especially for the 2022 FIFA World Cup and the opening took place in November 2019. The design of the stadium is inspired by traditional Qatar dhow boats – a tribute to the Al-Wakrah area, which is famous for fishing and pearl-fishing. The sports facility was built using the latest technologies to cool the temperature inside the arena. Architects exclusively developed the solution for this project. Al-Janoub is one of the eight mega-modern stadiums, seven of which were built for the 2022 World Cup, and one was reconstructed. During FIFA 2022, Al-Janoub will be able to receive up to 40 thousand spectators, and after the World Cup, the modular structure will undergo changes and thus the number of seats will be reduced to 20 thousand.

“Definitely, there are countries in our industry that promote its norms and trends. Their opinion is authoritative and considered by others, and positive reviews and recommendations from clients from these countries help to launch the new directions and industries, providing an opportunity to enter many world markets. The positive image gained in the markets of these countries plays a very important role. Thanks to the positive references of our clients whom we cooperate with on projects in Europe and Qatar, including the French tunneling company Bouygues Construction, the Austrian construction group of companies PORR AG and others – we have got the opportunity to participate and supply DEZEGA self-contained self-rescuers for such a grand project”, - said Yurii Spivak, Business Development Director of DEZEGA.