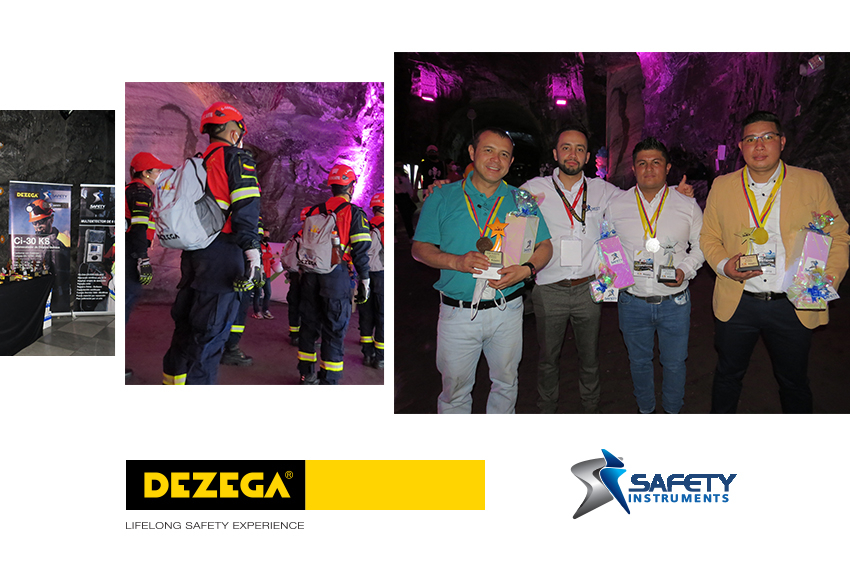 From 10th to 12th November 2021, the National Mining Safety and Rescue Olympics took place in the cities of Nemocon and Zipaquira in the Department of Cundinamarca, Colombia. The event was organized by the National Mining Agency. Mine rescuers from different regions of Colombia took part in the competition. And these are all those who are a part of the National Mine Rescue System: mining employees, mine managers, health and safety coordinators, mining engineers, technicians and technologists, rescuers and logistics coordinators of mine rescue services, market supervisors and assistance services. 15 teams participated in the competition.

Many of the participating teams were equipped with DEZEGA RPE. Sure thing, we are proud that the winner of the competition is a team of mine rescuers equipped with DEZEGA Ci-30 KS self-rescuers both as auxiliary devices for self-rescue and as a rescue for victims! This device has successfully proved itself in many countries of the world and has been deployed for many years.  Ci-30 KS is a compact self-contained self-rescuer that is certified in accordance with European, Australian, Ukrainian and Indian legislation.

The National Mining Safety and Rescue Olympics is a competition that evaluates and strengthens the proficiency, knowledge and skills acquired by rescuers in the field of emergency response in mining operations. The competition simulates the risks and emergencies that may arise when accident managing at mining enterprises.

Competitions in Colombia included several stages. Initially, the theoretical and practical knowledge of both the mechanics and the teams were assessed, their ability to identify and eliminate failures in the emergency equipment within an appropriate timeline, as well as to apply protocols for the use and maintenance of the equipment before, during and after an emergency.

The second stage is passing the test in virtual reality. One of the team members used virtual reality equipment to immerse themselves into an underground coal mining environment, where he had to determine the risk of methane and/ or coal dust emissions and explosions, rockslide, as well as an environment with an oxygen deficiency and the presence of various hazardous gases. In addition, all competitors passed the test for first aid treatment and more.

Such competitions are not only a test of the professional qualities of mine rescuers, but also an opportunity for meetings, informal communication and exchange of experience. DEZEGA is happy to support such events and wishes all participants success in honouring their skills and mastership in the difficult rescue business.