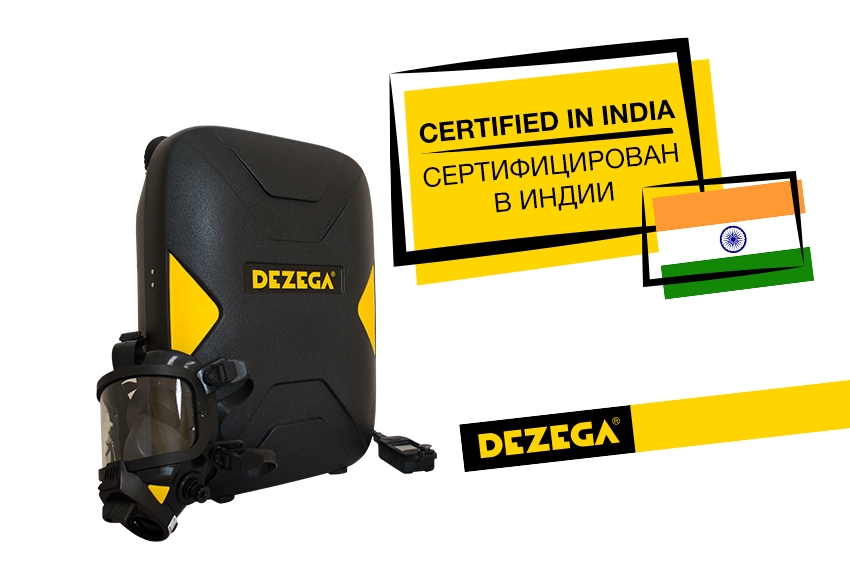 In September 2017, DEZEGA first publicly presented the prototype of our new generation breathing apparatus at the IMRB-2017 conference. It is not surprisingly, where else to present such a product, if not at one of the most respected and outstanding events among mine rescuers around the world.

As far as is known, the path from the device development to its deployment is a very long one. Self-contained breathing apparatuses are complex devices that go through a huge cycle of research, development, experimental and industrial tests, launching into production, laboratory certification tests and type examination. Only after this long procedure, the products are put into operation for users. It should be so, because human life depends on it. Surely, such procedure requires huge investments – both time and money, as well as in-depth competence and expertise.

We are pleased to announce that at the end of 2020, DEZEGA P-70 breathing apparatus was certified in India.

“The DEZEGA fifth generation breathing apparatus has the smallest dimensions and lightest weight, as well as the best breathing conditions among the respiratory protective equipment on the market’s segment. The DEZEGA P-70 breathing apparatus has many advantages, which many specialists in the mine-rescue and mining industries will soon be able to see on their own”, - admitted Yuriy Spivak, Business Development Director, DEZEGA.