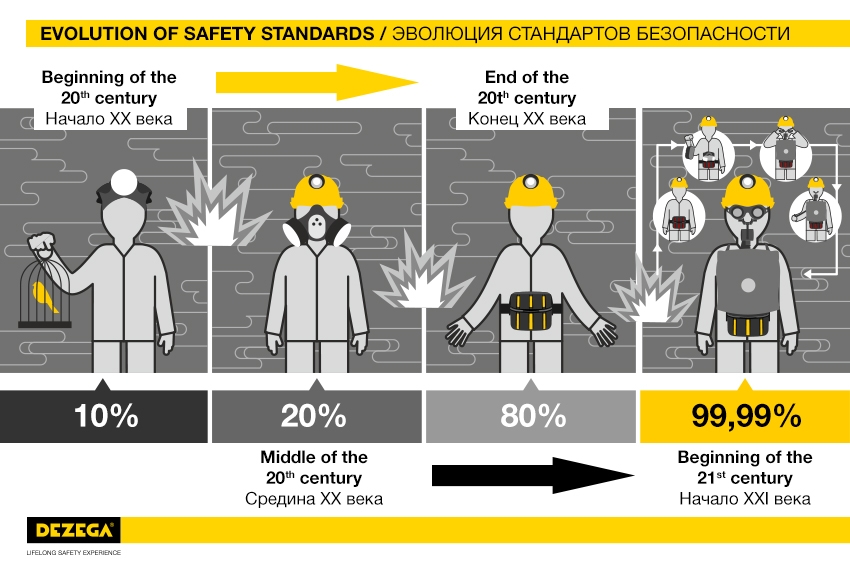 In old times, the miners used canaries as living indicators, signaling the presence of dangerous toxic gases. Find it hard to believe, but the lives of the underground workers depended on this little bright-yellow bird. Canaries are very sensitive to all kinds of gases, in particular methane and carbon monoxide. If there was enough fresh air in the mine, the birds sang and chirped. If the canary suddenly began to worry or fell dead, the workers understood that they urgently needed to leave the mine. The level of dangerous gases had risen and the canary was as a signal. In addition, mine rescuers often used canaries during descent into emergency mines and with their help, they discovered gaseous workings to redirect the air stream there. Canaries have been of great help in preventing explosions and saving lives for many decades. Of course, if the miners did not get out of the mine in time, then their chance of survival was no more than 10%...

As time passed, technologies and gas analyzers replaced canaries. Humanity invented, developed and began to produce filtering breathing apparatuses. The chance for escape during the explosion was up to 20%, because filtering breathing apparatus filtered only certain dangerous gases. In addition, they were unable to protect underground workers in an environment where the oxygen level in case of emergency was less than 17%.

The technology is evolving, and there is no limit to perfection. At the end of the 20th century, the self-contained respiratory protective equipment was developed. The apparatuses were modified, improved, produced more and more modernized and new models every year. According to the world’s practice, the real steps on improving the safety level of underground workers are taken only after accidents and a large number of victims. Self-contained respiratory protective equipment is a notable progress in improving the safety and health protection of miners. After all, the self-contained self-rescuer completely isolates the user from the environment, protecting him from any concentration of toxic gases and absence of oxygen. Although the existence of the SCSR does not provide a guaranteed escape of the miner, and his chance for survival is no more than 80%, since it is still necessary to know how to don and breathe in the self-rescuer.

Only at the beginning of the 21st century, with a risk-oriented approach in the analysis of the safety and health protection level, it was decided to introduce mandatory training for miners. Training requirements are set by law in the following countries as Republic of South Africa, Australia, USA, Ukraine, RF. Analysis and investigation of accidents show that very often the death of workers is due to low level of trainings and violation of safety and health protection rules, and not due to problems with personal respiratory protective equipment.

Unfortunately, in some countries we are witnessing the reluctance to invest in workers' training, as well as a tendency towards relaxation of the Safety Rules, which can lead to dire consequences and return the level of labor protection to the level of the 20th century.

DEZEGA Company produces unique training equipment in order to train miners how to don and breathe in the apparatus. We understand that it is an important and necessary component of a large safety and health protection ecosystem. Our training self-rescuers allow the user to be trained with a minimum investment and minimum spent time and resources. In case of proper training and quick donning during the accident, the chance of  escape increases up to 99.99%! The investment in the self-contained RPE is equal to the investment into the safety and saving of someone's life,

– said Anton Sakovych, Chairman of the Board of Directors, DEZEGA.